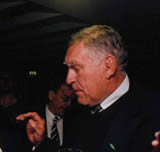 Wales travelled to Italy with some degree of apprehension following the fine win against England at Cardiff. All the players, supporters and management team were aware that Wales had lost on their previous trip to Rome 2 years previously.

However, the game resulted in a surprisingly easy win for Wales, especially considering how close a game the Italians had given the Irish a week before.

In Welsh forwards stood up well to the ferocity of the Italian pack and an excellent first half performance was capped by Martyn Williams’s try against the base of the post just before half time. This gave Wales a comfortable cushion for the second half though Italy were to compete very strongly in the first 20 minutes. The Welsh defence was excellent and six tries were scored in all. The best was that of Shane Williams, though the work was done by some superb offloading of the ball in contact particularly by Kevin Morgan.

Martyn Williams once again had a superb match while the new glamour boy Gavin Henson had a rather quiet game apart from a good “up and under” for Tom Shanklins try. Both 2nd rows (Brent Cockbain and Robert Sidoli) scored 2nd half tries and it must be a long time since this has happened.

The final score (38 – 8) in no way flattered Wales and the Italian coach (John Kirwan) was very complimentary in his post match remarks regarding the Welsh. In fact, he suggested they might go on to win the Grand Slam!!